Needless to say, I am probably quite the amateur amateur out there. Sure, I’ve been licensed 6 years, and I enjoy Ham Radio Contesting quite a lot, but I never seem to be the slightest bit prepared, and when I try to be, that’s when things go drastically wrong. This year, I was going to be ready. I was going to be prepared. I was going to get the car ready a full day in advance for my rover station to rack up the contacts, and place well, and bring back a whole load of points for the Rochester VHF Group. At least… that was my mindset last June. As time ticked down to the contest, things went south quick. In April the vehicle that I’ve had for the past [going on] four years, and the one that I’m used to loading out for the contests, decided to have a frame blowout, leaving me to have to rethink a few things for contest time. Thankfully I was able to borrow a similar vehicle from the fam, leading me to be able to retain my usual system, in fact making getting in and out of the vehicle for microwave contacts a little easier. However I did learn a few lessons this June that I should not have had to learn this way, and that should be been common sense things to know before heading out.

Lesson 1: No matter how closely you follow the design specs on building an antenna, ALWAYS test the SWR before you head out on the road.

Lesson 2: Even if you use it every week, your dipole may perform more poorly under improved conditions.

Let me start with my setup. It’s not pretty. In fact, the last few years in being involved with this, I mildly pride myself on how ugly and cheap it is. A hitch mount mast holder, designed for Flag Pole Usage, Military Surplus Aluminum Mast, Moxon Design Wire Antennas in a PVC Enclosure for 2m, 220mhz, and 70cm, and LOTS of Gorilla Tape.

In looking at this, remember these two things:

A) No antenna used cost more than $10, in fact, they could be built using items that you may have lying around the house

B) If anything, it’s proof that anybody, with the right motivation and effort in this hobby can get on the air, contest, and not do too badly.

C) I started participating in this contest my Junior Year of College. I was broke. Still not rolling in the dough, but I can at least swing the gas to rove without pulling in overtime two weeks before. That being said, even after spending $120 on a decent 14 el Cushcraft beam before last contest, I crushed it with contacts off this Moxon in the January contest, why bother going through all the effort of assembling and disassembling the antenna before stops if I can leave this little guy up the whole time, and STILL make the same amount of contacts?

I don’t own anything that goes above 1296 myself, however another local rover and fellow club member has been pushing to get more people on the microwaves, therefore he will lend us equipment before the contest starts to aid us in that effort… I’ll tell you, it’s sparked my interest! An SG Labs 2304 Transverter powered by a RadioShack battery, and Driven by a Baofeng UV-5RA, and a small, handheld parabolic dish for an antenna making contacts from Attica, NY into Canada!? Sign me up, doc!

The fact of this contest was that I was going to beat my January Score. I knew it going in. I built up an awesome 6m Moxon the week of the contest, sure, it was completely untested, but it was going to work! January I didn’t have anything for 6m, I couldn’t even get a dipole working, so I simply threw on a dummy load if I knew the contact was close enough, but I had over 100 contacts on the other bands, so I was set, convinced that this was going to work. Of course, knowing how Murphy’s Law always applies to things that I do, I decided to throw the 6m Dipole that I had strung in my attic, and used weekly for a local net, as well as for a little FT-8 Usage, into my car, just in case. I also had been using the 2m Moxon for years now, and that nice Cushcraft I bought last year was just too much of a hassle, and I wasn’t using my vehicle, so transporting it could be difficult, as I didn’t want to scratch up a vehicle that wasn’t mine… so I stuck with the Moxon. 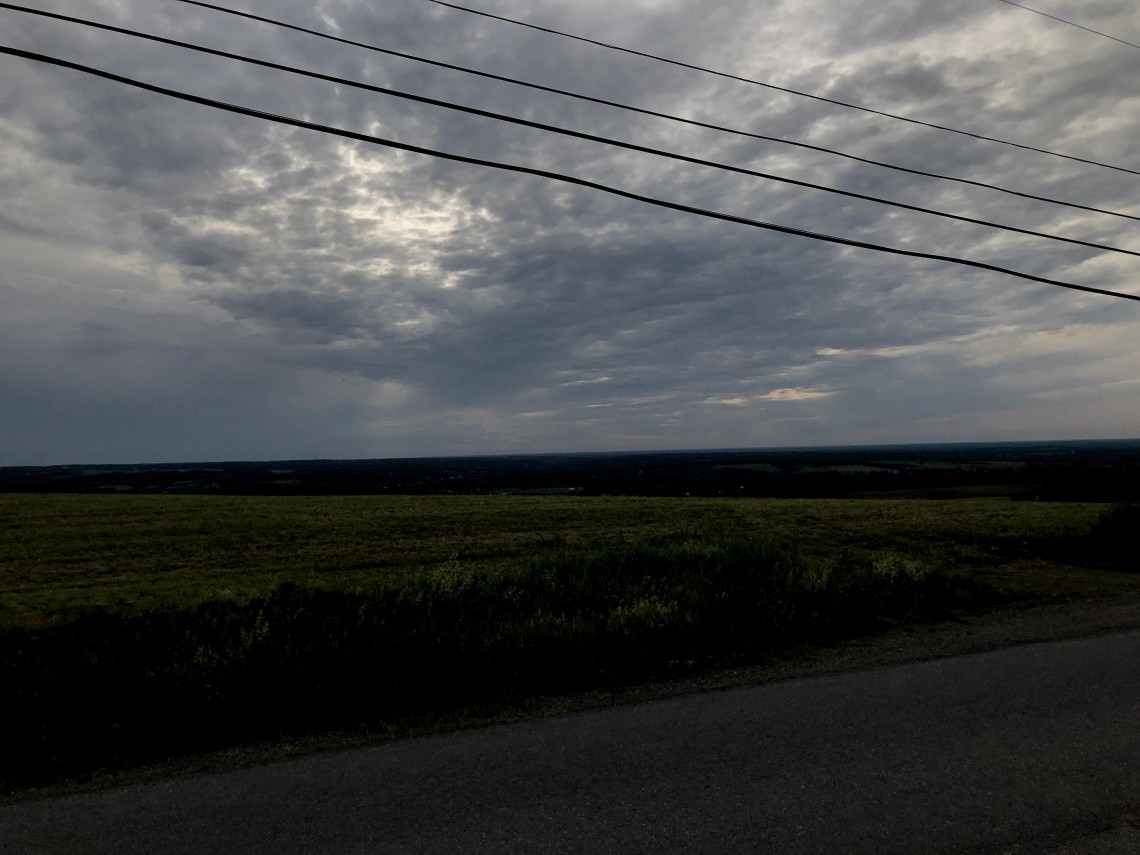 I get to my first location, grid FN02VU in Attica, and finally get setup, decide to check the SWR on 6 as it’s a new antenna, key up the radio… shuts. down. It’s a good thing I wasn’t transmitting with the sheer volume (both dB wise, and quantity) of expletives released at that moment. This is when I was questioning every fiber of my being. Why didn’t I test the moxon before I left? Better yet, why in the world did I place this PVC cement on the joints before I tested it!? This was likely the most stupid thing I have done in the 6 years I’ve been licensed. But prepared me decided to grab the dipole out of my attic, right? So I put that up, power is still turned down to about 2 watts. Tunes fine. Inch it up, 20 watts, fine, 30 watts, 2.8:1… oh… great… 40 watts? Radio shuts off. Which is a great feature in the Icom 7100 that it does that if too much power is reflected. Beats blowing up any day for sure. But where does this leave me? Only slightly better than January. Really Low Power on 6m. Who even knows if I’m actually resonating? Whatever. 6m isn’t open anyways, the contest started at 2pm, it’s now 4:15pm, and I’m not on the air yet, everything else is good, lets get it. 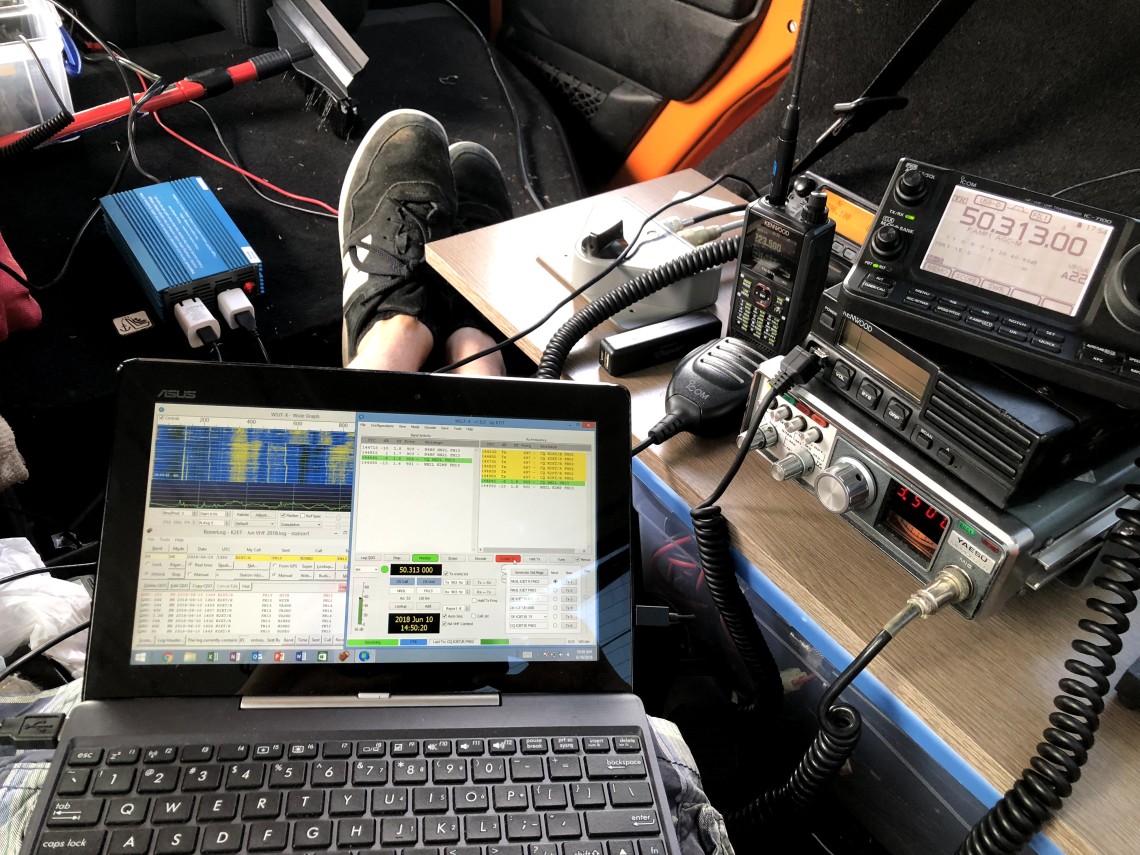 I fire up the radios, and I’m good from 6 (on LP) to 5g. Setup the Voice Keyer on the 7100, and get on 144.215. Verify the frequency isn’t in use, and start calling CQ. Contacts slowly trickle in. I hear something come up in the band… a 4 call, and a 1 call. They were even oriented off the front of my antenna, they should have heard me, why weren’t they hearing me!? The freaking moxon. Why didn’t I opt for more gain!? Well, but in January I worked everyone just fine… because there weren’t any openings beyond FN01.

End the night around 10pm with 50 or so contacts. In the morning I get setup in FN13 with a clear view SW, perfect! I work other stations up to 2304 no problem, 6m is still shot, but I really don’t care at this point, I’m still working other local stations on 6 with no problem, but just as I’m packing up to meet up with our club to do our “Rover Blitz” Lunch, 6m opens WIDE! Calling and Calling and Calling… nothing. Just like when the initial antenna wouldn’t tune, I let out a line of cursing. I pack it up, and go to lunch. I logged about 32 contacts from there, again, stark-raving mad about how open 6m is, and I, yet again, have screwed myself over on the band. 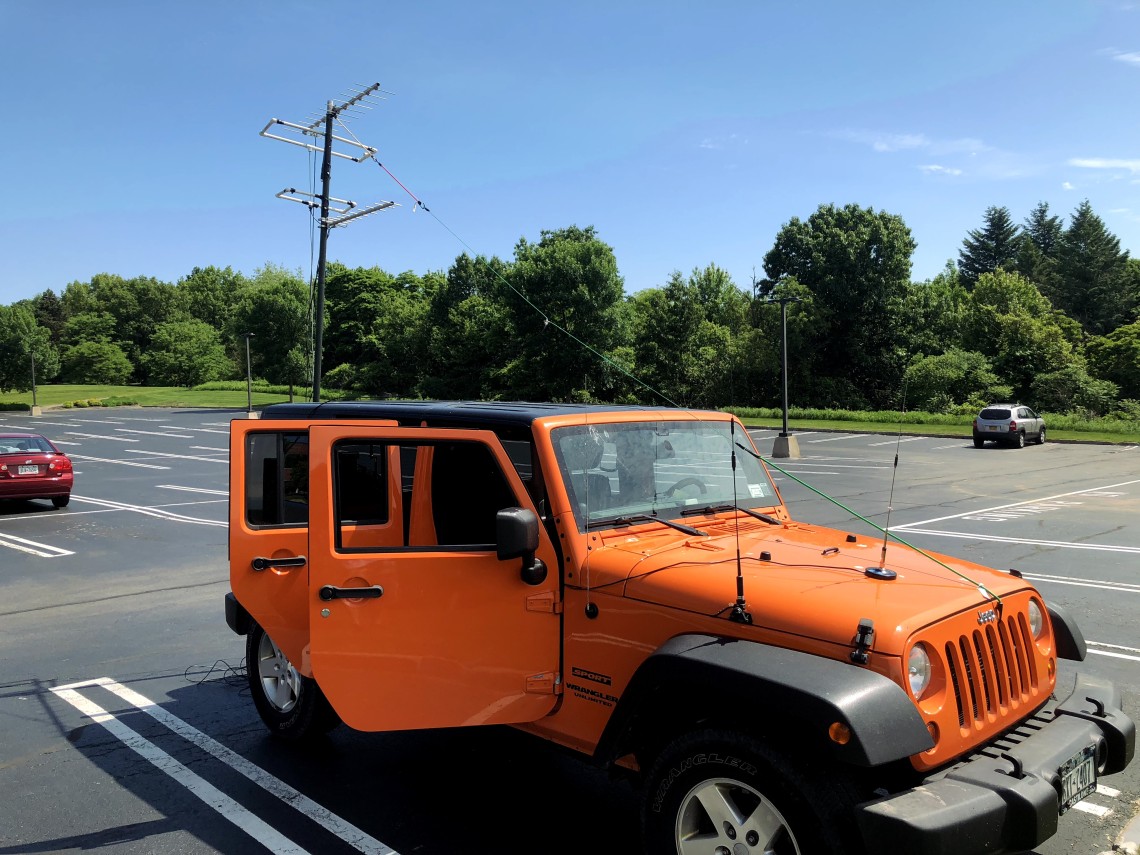 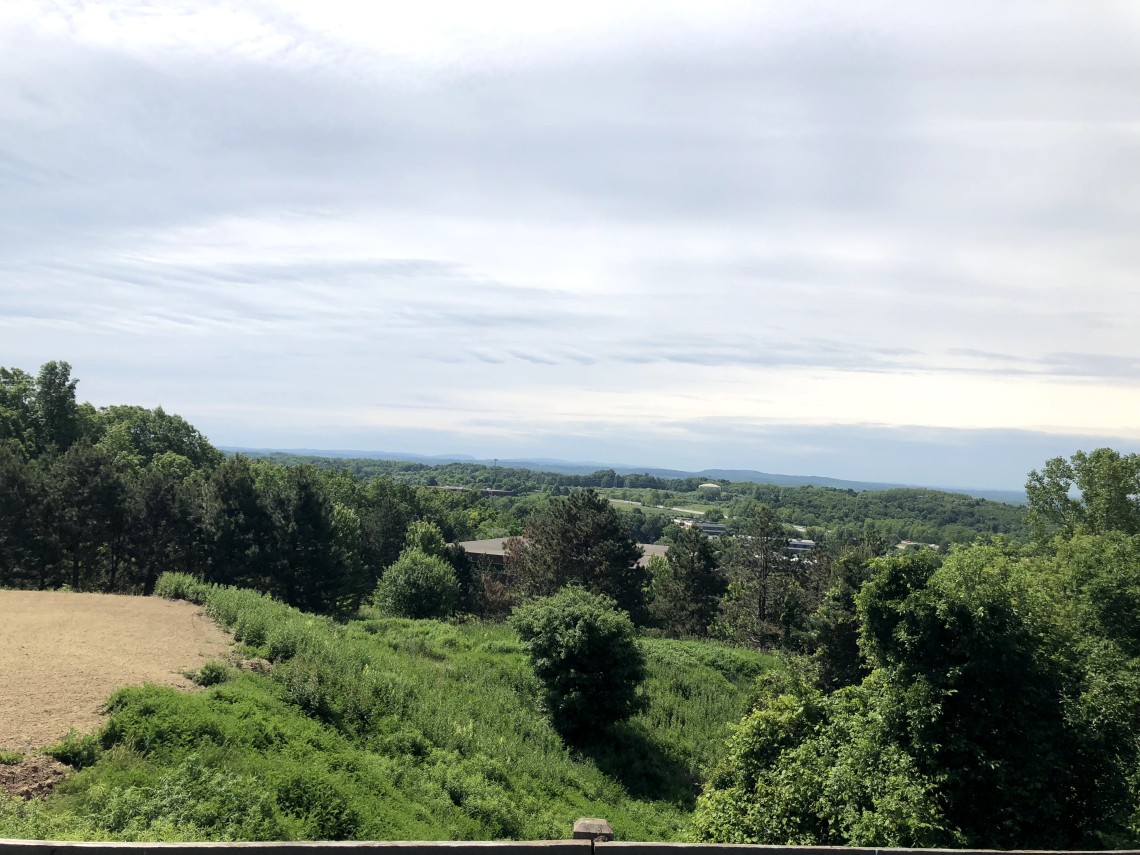 A total of 7 stations show up for lunch, now, we aren’t a large club.. We’re not racking up 100,000 points each from this grid circle, we aren’t coordinating with other stations to call us, we’re just a small group, some of us are even simply submitting check logs to give the actual rovers points, and their additional contacts aren’t even helping the club. We do our quick little grid circle after grabbing a bite to eat, a grand total of an hour, with every station loaded out from 6 to 1296. We get our points, and move on. From there, I move to FN03, stopping at GCC in Batavia. It has a fairly decent view to the east, making me able to work the fellow RVHFG members without any issues from 6 to 1296. Before I even get setup, I happen to catch another rover station just as he’s getting ready to pull out and hit a new grid, we quickly sked across the parking lot, running all bands, 6 to 5g. Once I finally figured out how to tune him in on 5g that is. From there I got myself up over 100 contacts (barely), but the high bands were dead because of how open 6 was. I worked the LIM group in FN12 on a couple bands, caught a few rovers, and a few locals, but that was it. I threw in the towel, broke my station down, and called it another June VHF Contest in the books.

While I didn’t get the 6m openings, or any of that 2m DX that opened up, I’ll gladly take my score just over 28,000. It’s my best June score yet, in fact the first year I roved I forgot to submit my log and wasn’t even bothered by it because of how few contacts there were, but the last two years with only 4k and 6k respectively, this is an immense change. It has also put me in a new category however, removing me from the Limited Rover category into the Classic Rover category by adding 222, 902, and 1296.

This June convinced me that it’s time to make some upgrades to antennas. I want to be able to catch that DX on 2m next time I hear it, no I’m not going to venture out of the LP category, I don’t want to amplify my station at all actually. More power out = needing more power locally to run it, and I’m simply running powerpoles from the car battery for this setup, and I kind of like it that way for now. Eventually I will be transitioning over to a solar powered station for this, but that is a few years down the line yet.

Follow up: Upon writing, and discussion, the odds are the 6m issue was less of an SWR problem (though it was higher), and more of an issue of RF. I should have choked the antenna, and the whole problem could have been averted. Lessons learned for next time.