It’s the largest contest of the year! The one with the most activity in North America at least. Though it being a contest isn’t what it’s all about. Field Day is meant to be an exercise in emergency preparation, and it’s a great exercise in communication, cooperation, and knowing what you can do in a pinch. In the last 4 years, we in Genesee County, NY have resurrected a club. While we have a small membership, we all meet the third Friday of each month and discuss amateur radio related events, and topics. Of course our meeting in June, which was a week before Field Day, was related to preparations we were making to ensure that we were ready to be on the air at 2pm kickoff of Amateur Radio’s biggest day in our neck of the woods.

Our station setup was at the Genesee Community College in Batavia, NY. Great vantage point for VHF/UHF communications (which never fully got on the air), as well as plenty of trees for us to run our dipoles, and couple of beams that we had. We operated as 3A, and we had our VHF station as well, in the night hours/wee hours of the morning, our transmitters went from utilizing all bands possible, to two of us being on the air, one running 40m CW, and myself running 80m Voice. At 2:30am, I was working my way through a pileup on 80m Voice, which is a little different for me. I don’t usually call CQ at night, I usually Search and Pounce, but with that being said I thought about how many other people out there are doing the same thing… somebody out there has to be the one calling!

Our setup was pretty much the same as last year, however working with the new location had a few perks – last year being our first as the “new” club, we were in search for a spot for a while, however we were able to use the Genesee County Fairgrounds, which worked great! Up until Saturday evening, when the racetrack nearby started up, and suddenly everyone had to slap on headphones. We had three motorhomes on site, two of which ran stations, one running an Icom IC-7100, and the other running a Yaesu FT-991. In addition, there were two large tents (one is on the other side of the GMC motorhome), one of which also had a 991 setup, and the other contained our VHF station running an Icom IC-9100. In the middle of the site (under the orange popup) was our little Honda generator which was more than enough to power all of the stations with no problem. For HF antennas we ran an 80m OCF, and a 40m Dipole, as well as a RadioWavz Scout, which is good on 10-40. For VHF, we ran a stack of Moxons for 6/2/220, and for 440/900 we had a few beams, however I won’t go into detail for those, as we never got VHF on the air beyond 6m. 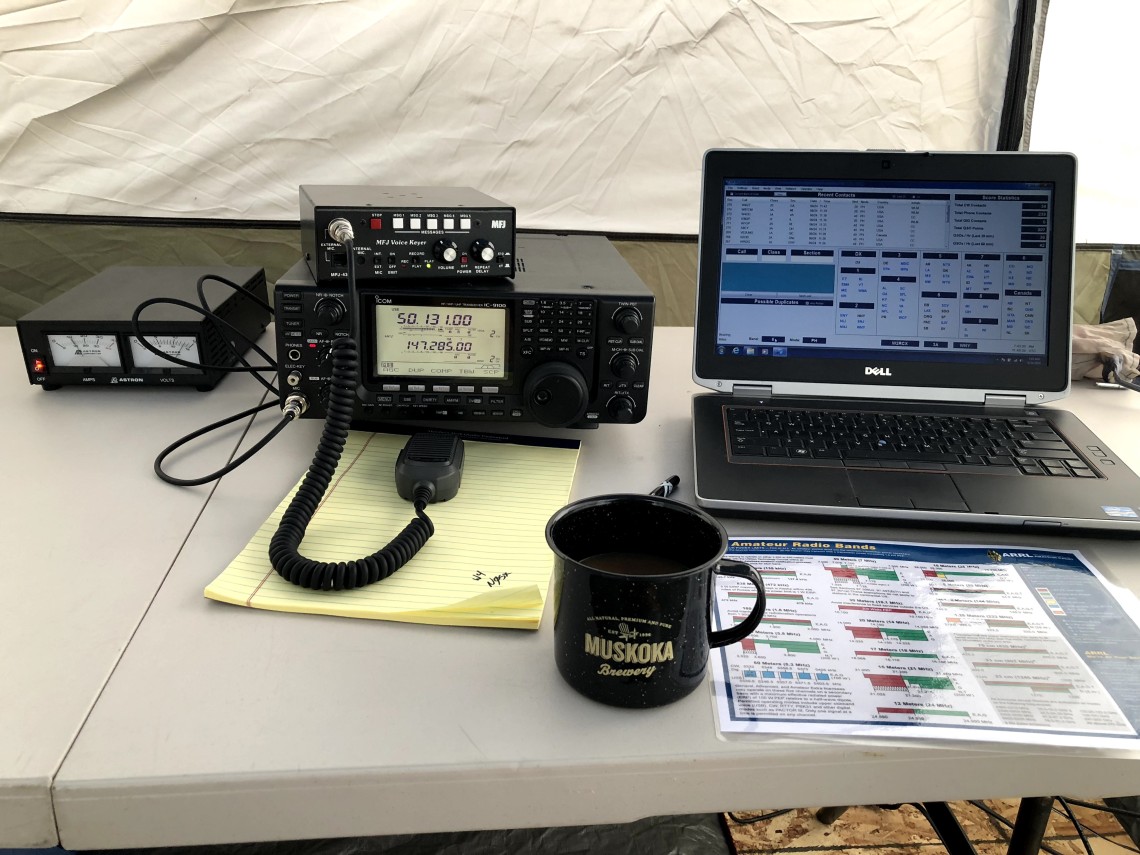 We were able to achieve a couple of bonuses, the first being contacts off of an alternative power source, which we were able to do using a solar charged battery. The second was by making a satellite contact, we were unable to get the initial contact on AO-92, however an hour after that attempt we were able to make a contact on AO-91 (video to come later, still needs to be taken off camera).

All in all we stepped up our game from last year, I haven’t compared our overall contact difference, but I believe that we were able to improve upon last year for sure. We had a few new licensees that we were able to get on the air with, and allow them to experience more than 10m on HF. In addition, though it was nothing like the VHF contest, we did have a small 6m opening to the South, and intermittently to the West, on Sunday morning, allowing us to work Kansas, Nebraska, Florida, Alabama, and Georgia. I am a little bitter about how many stations simply flocked to 50.313, and solely used FT-8. With how open that band was – in and out, yes, but still open – there should have been more activity than there was.

We stepped up our game from last year, there are some improvements to be made going into next year in regards to station setup, software we want to run, etc., so I guess that means it’s time to start prepping for next year!

View all posts by knutekjc