This turned out to be a great contest all around – the 6m openings allowed for some great multipliers, and SSB activity was well above what has become normal, and the weather was perfect for the rove.

Starting out, I was unsure whether I was going to hit four, or six grids. Up until the morning of the contest I was leaning toward six, however intermittent issues I was still working out the kinks to at 11:30 on Saturday Morning led to needing to make a call, leave now, and figure out the rest on the fly, or work out the issues, and save some drive time.. I opted for scrapping the six-grid plan, and just went for the local four, and had most of the kinks worked out by the time I hit the road.

I initially drove up to Sodus Point, in FN13. My thinking was that from there, given that I had the ability to run off battery power, I could make some easy clean sweeps with the Canadian stations just across the lake. This proved to be nothing more than a waste of an hour and a half of contest time. I arrived on site, only to find that the noise floor, as well as the background noise was pretty unbearable. I deployed the 6m elements, and hopped on digital for a few minutes, only to discover that something wasn’t right. I couldn’t figure out exactly what it was, just that my decodes seemed to be off. I didn’t think too much about it then.

I brought in the elements to the 6m antenna, and quickly moved back to a location that I commonly use in FN13, an office park outside of Victor, NY – this was about a 45 min haul from where I was at the time. When I was setup, I thought I’d give FT8 one more shot since 6m was kind of open, but not very many stations were on voice at this time. I noticed some timing issues with decoding, then I was having USB sound issues. I connected the laptop to my Wi-Fi Hotspot, and ran a time sync. That fixed the decoding problem, apparently my ASUS wasn’t holding a time sync for more than an hour or two, so I left it connected to the hotspot, and started transmitting. It seemed like no matter what I did though, after about three or four CQ’s, the USB sound interface would fail. It honestly didn’t bother me that much though, I closed WSJT-X, and moved on to SSB, and started picking off contacts with the locals. I worked here for about two and a half hours, but around 6pm I decided to move on to the next grid.

I went on to FN02 after that, hitting a location much closer to home, and that has clear shots in multiple directions. This is another spot where I can usually work the VE3’s up to 2304 without batting an eye, but something I regretfully did not do is use spotting sites, or send messages to any of them to try to coordinate, and work up the bands. Oh well, next time. I let out some CQ’s on 6m, and the band was just starting to open up a bit – before I got too carried away, I made sure to run the bands with as many of the locals as I could, and then worked the opening for the rest of the evening.

I attempted WSJT-X one more time here, and we decoding with no problems, however I just think there was too much noise on my signal. I’ve since troubleshot this issue, and from what I can determine, I was just using a poor quality USB cable. When it’s plugged in to the computer, it raises my noise floor S3-S5. I didn’t even think about this though, I unplugged the computer, packed it away, and this was the last time I even tried digital. SSB was so active for a change, it wasn’t worth the time to look at. Around 10:30pm, I decided to call it, and headed home for the night.

I started Sunday morning in FN12, I was on the air between 7:30-8am, and there were a few of the usual suspects on then, however activity didn’t really seem to pick up until around 10. I ran the bands with the locals, and then started working a 6m opening around 11. I picked up another quick 15-20 multipliers here, and ran through the bands with some of the locals before looking at the clock, and realizing that I was going to be late for the rover meetup… AND I FORGOT THE LOANER 2304 BOX AT HOME! 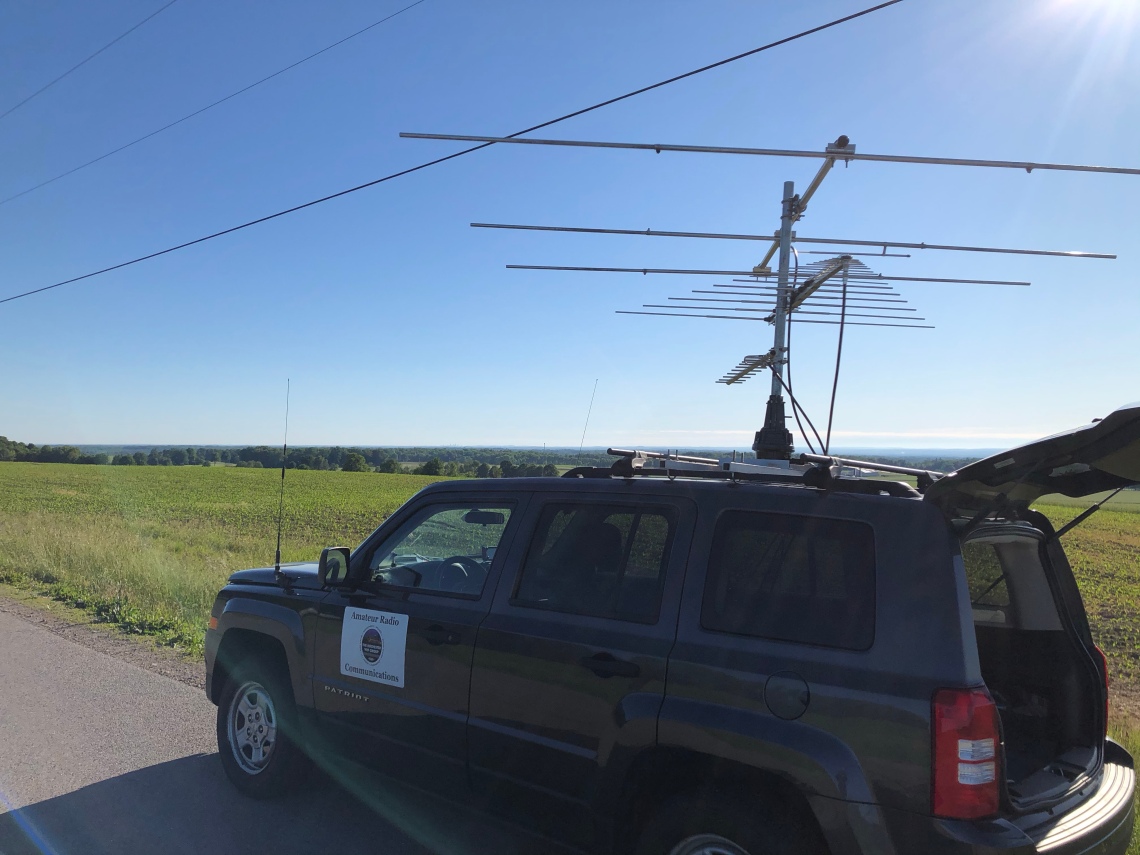 I bolted home, grabbed the 2304 box, and met up with everyone… and then I realized that I had forgotten to print the sheet sent out ahead of time with the order stations, and frequencies to be used (thanks Jarred for the spare). We ran through our quick lunchtime grid circle in about 3 hours (that’s a record… helps when we can’t chit-chat at lunch, and get right to it), after that I headed out to FN03, grabbing some “breakfast” (at 3:30pm) on the way, because some of us just generally forgot to eat.

After doing a drive around to try to find a little bit of a different spot to not cause RFI problems with anybody else that was parked where I was going, I actually opted to try out the spot that we use for Field Day for something different. Shooting over a parking lot with the roof mast, I still get a decent shot in one direction there. Since I’ll be setting up a VHF station again on FD, I figured I may as well see if I can get a decent bearing that’ll provide me with the most contacts. Doing this when there is all of the band activity may have put a little damper on my score for a little bit, but it was helpful as far as knowing where exactly to orient my antennas for the best performance. When one of the other stations moved from the other spot, I slid over there – it really is just across the street… which is a good thing, because I left my dish laying on the ground when I pulled away.

I finished out the contest from there. 6m was opening, and I didn’t want to waste anymore time driving near the end of the contest. Around 9:30 when it was dark, the parking lot lights came on though, and completely wiped out the middle of the 6m band. I tried for another half hour but decided to call it a quits a little after 10. I did a quick drive-by to make a 2304 contact from the road and called it a night.

This contest’s truly beneficial addition was a dish for the 2304 Transverter. The dish was too big to mount on the roof rack, and I didn’t have everything setup quick enough to get it on the hitch mast, so I mounted it to a small piece of 2×4. From there, I drilled out a hole to easily slide it on and off of an old projector screen tripod, as well as put screws at different positions to be able to easily change the elevation angle, then I would only have to worry about moving side to side to peak a signal.

Additionally, on Sunday Morning, I decided that I was sick of the sprawled out back of the car layout, so I shifted everything to allow for a backseat operating position. Since the backseat splits on fold down, this was pretty much as easy as moving equipment forward and turning 90 degrees. Operating position is going to be my focus moving towards September, though I’m not sure I’ll be able to operate that contest, I may have a conflict. If that’s the case, I’ll likely still hop on FM for an hour or two, and hand out some points. I would like to assemble a operating shelf, and rack for transverter equipment, fitted to the area. Sometimes I do have a passenger during the contest, so I may stick with the backseat position. I’ve been holding off ordering a 3456 transverter with the current FCC proposal of eliminating that band, so if I’m adding anymore bands anytime soon it’ll likely be 5 or 10 ghz, but that likely won’t be anytime soon unless I see a deal I can’t refuse, or get the bug to build something.

All in all this was a very enjoyable contest, and so it’s projected to be my best score to date, more than tripling my efforts last year! I was much more diligent with logging accuracy, unfortunately having to change logging software mid contest put a small slow down on operating time, but accuracy was more important in my mind having lost about 3k points last year on simple errors.

Mildly disappointed that I couldn’t quite get the plans for the /P operation to come together, but that’s just how it happened to workout. I used this opportunity to at least test the new Bioenno 12 Ah battery purchased, and ran my transverters, and 818 off of it without batting an eye. I didn’t get a full grasp on it’s ability as I charged it Saturday night as well after having used it all day, but I have no doubt I could have made it through the full contest in this method of usage.

The weather was perfect, equipment malfunctions were minimal (for a change), and as always, looking forward to the next one! Now… for the remaining teardown, and junk food detox – does anybody else forget to bring a couple of decent meals, and find themselves eating way more fast food than normal during these?